7/7 London Bombing - Memories of the Day 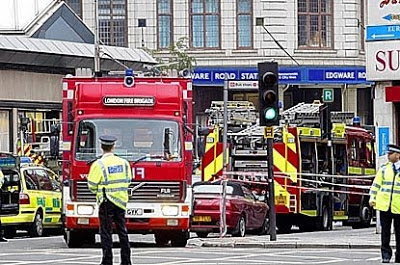 This is a re-post of something I wrote five years ago. 52 Londoners were killed and many were injured on 7 July 2005 when four suicide bombers exploded their bombs, three on the tube network and one on a bus.

At the time I was working close to Edgware Road tube station, where one of the four bombs was detonated, and it was at the usual time I arrived at the station. That I wasn’t there at that fateful time is down to a matter of luck really.

I arrived at my local Piccadilly line tube station at about 8.15am, only to find the station closed. An underground worker informed me that there was a ‘power outage failure’. I took an overland train to Finsbury Park station, intending to get onto the Victoria line to Kings Cross, but found the Piccadilly line was now working, so took that  instead to Kings Cross.

As I was ascending the escalator at Kings Cross, to make my connection onto the Circle line to Edgware Road, the emergency sirens sounded, with instructions for everyone to evacuate Kings Cross station. This must have been around 9am. On exiting, I milled around with hundreds of other passengers at the front of the station, waiting for the all clear to continue my journey. At about 9.10am, a police officer rushed towards us, waving his arms, shouting ‘get away from the station’.

I decided to complete my journey to work on a bus, and managed to get onto one going to Marble Arch, where I could walk the rest of the way. I arrived at work at about 10.15am, and my colleagues there were still talking of power failures, but I had noticed a thick cloud of black smoke hanging over Edgware Road station.

Then news started to come through of the bombings.

I feel extremely lucky that I wasn’t caught up in any of this, but have also reflected that the events I witnessed just didn't make sense.

Why was the Piccadilly line closed at 8.15am, but open again around 8.45am? Why did the emergency alarm sound at Kings Cross some ten minutes before any of the explosions? And why was the story of a power failure put about by the authorities? Also, why have we seen so few photo images of the bombers on the day, when the London Underground has hundreds of CCTV cameras?

This is not intended to be a 'conspiracy theory' piece but these questions remain unanswered today.


There was a very strange feeling for a few weeks after the bombing around London, especially when travelling on the underground. People voluntarily kept bags and ruck sacks open to show there was nothing untoward in them, and Londoners pulled through in the end.