Will a Corbyn Leadership Win Steal the Greens Thunder? 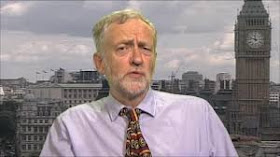 I’ve not commented until now on Jeremy Corbyn’s campaign to become the Labour party leader, preferring to leave it as a Labour party matter. But it is becoming clear, that if Corbyn wins, it will have a big impact on the Green party’s fortunes.

I wouldn’t have given him a prayer of winning a couple of months ago, but he seems to now have the momentum running his way, with several large unions (some not all that left wing), supporting him, and polls putting him ahead amongst the somewhat strange electorate that is allowed to vote. The bookmakers now say Corbyn is odds on favourite to triumph in the contest.

There has been a trend dating back as far as 2010 with Cleggmania, through events in Greece and Spain, the Scottish referendum, the Green surge and now Corbyn’s astonishingly popular campaign. Incidentally, all this passed Left Unity by as though they weren’t there, and they may possibly not be for much longer. It is an expression of dissatisfaction with the status quo of politics here and around the world. Bernie Sanders Presidential campaign in the US is another example.

He may not win of course, but it is now looking as though he will, although if he was smart he would oppose our EU membership when Cameron’s expected reforms actually make our terms worse and with TTIP looming. He seems to have passed up an opportunity to split the Tory party wide open, but we will see.

Should we celebrate a win for policies lifted straight out of the Green party manifesto of 2015? A proper living wage, relax anti-trade union laws, renationalise the railways, fighting austerity; are all policies we fought this year’s general election on, and if another party implements them, so what?

Well, it would likely kill off our growth in membership if Corbyn wins and take away our unique selling point of anti-austerity party in England and we may suffer a similar fate to Left Unity. It is bound to affect the Green party’s popularity, not in a good way, at least at first.

Corbyn may win, but then be deposed by his MPs, hardly any of who support him. I would not bet against David Miliband making a return to the House of Commons during this parliament if opinion polls continue to show Labour trailing the Tories after a year or two. In which case we will be back in business, big time, as some of the unions may want to jump ship at that point.

Interviewed in today’s Guardian Andy Burnham, one of Corbyn’s rivals for the leadership warns of a 1980s SDP type split in Labour party. He is careful not to blame Corbyn, but the message is clear, his win could lead to the exodus of many MPs on the right of the party. Personally, I think this is best option for Greens and the Labour left as we could come together as a genuine electoral force on the left of British politics.

To hold Labour together though, Corbyn, if he wins, will need to back track on some if not all of his left policies and he has already made an appeal for ‘unity’. He may become a sort of English Tsipras as he disappoints all of those he has inspired, which would be a boost for the Greens if we play our cards correctly.

I my view, Labour will never again be a proper party of the left, whatever the membership thinks, and one way or another, Corbyn will be neutered by still powerful forces in the party.

So to all of those Greens and others cheering Corbyn on, I say expect to be disappointed. And to those fearing a Corbyn win for the detrimental effect it may have on the Green party, just hold on. Let us see exactly how all this pans out.